Thanks to the preprint discussed in the previous post, we now have a good amount of aDNA from around the Caucasus that can help us understand what was going on in this key region. The answers are still not clear, but we can take a look at what we have and see what we have learned and what is yet needed to fill in the gaps.

From the Neolithic to the Chalcolithic

The Neolithic in the South Caucasus has been dated to start around 6000 BCE, though recent finds might push that date back at least 1000 years to a much more reasonable 7000 BCE (probably earlier). Unfortunately we don’t have any Neolithic DNA from the area, though we do have UP and Mesolithic samples and other Neolithic samples from surroundings. Overall, we can expect that the Early Neolithic Shulaveri-Shumu Culture should be somewhere intermediate between CHG and ANF. I really don’t have a clear idea of what the Late Neolithic Sioni Culture (from c. 5000 BCE) represents. Maybe some migration related to the Halaf Culture, or just a different phase in the Neolithic development. Genetically we shouldn’t expect a big change, probably just a more complex mixing of different people, including some Levant and West Iran.

The first Neolithic samples we have are actually from the Northern Caucasus. A Meshoko-related site called Unakozovskaya, a bit to the south of Maikop. The three individuals are from around 4500 BCE, and are family related as shown by their common mtDNA R1a. The Y-DNA of the two males are J and J2a respectively.

We can assume that they basically represent a migration from the Shulaveri-Shomu Culture to the north of the Great Caucasus mountains. They are autosomally modelled as some 50/50 CHG/Anatolia_ChL, while Anatolia_ChL itself might be around 70/30 ANF/CHG. So till here everything looks as expected.

The significant change in the South Caucasus comes at around 4200 BCE. Traditionally linked to the Uruk expansion, this has been debunked by more careful analysis of the archaeological data suggesting an origin from the East¹. This is confirmed by the Armenia_ChL samples, which point to anywhere but the south, and which are some of the most intriguing ones we have so far.

These Chalcolithic samples from Armenia are dated to around 4300-4000 BCE and come from the Areni-1 Cave (see map below). 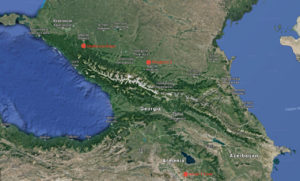 The genetic structure of these samples is quite difficult to assess. On one hand, they do show an Iran/SC Asian signal, together with their Y-DNA L1a. On the other hand, they also show steppe admixture (rather than EHG, since now we know that, at least at this time, at this time there were no EHG in the North Caucasus steppe, but rather a population that was intermediate between CHG and EHG, and basically directly ancestral to Yamnaya. This admixture in the samples is a bit surprising, if we assume that these Armenian samples represent newcomers from the east or south east, and they’re still quite south of the steppe. By contrary, the slightly older samples from near Maykop don’t show this admixture. It probably occurred through the Caspian rather than the Black Sea coast.

But even more surprising is the shift towards the North West that these samples show. Something like Balkans LN admixture. Given that neither of the samples from North of the Caucasus mountains show this admixture, it seems unlikely that it arrived through the northern Black Sea route. But we have no evidence either of this admixture coming through Anatolia. So at this point is difficult to say if this is really admixture from Europe or something else. We’ll have to wait for further samples to clarify this.

And then the Maykop Culture appeared in the North Caucasus. One of the most important Early Bronze Age cultures, its origin has been rather obscure debated for a long time. It’s only in the last few years when archaeology started to reveal some more clear connections to it from other cultures and the works of Mariya Ivanova were able to propose a well substantiated hypothesis about its origin¹, linking it to the Iranian plateau and South Central Asia.

Genetically the Maykop samples look to descend from the Armenia_ChL population that arrived to the South Caucasus around 4200 BCE and then moved to the North Caucasus around 3900-3800 BCE. Unfortunately we hardly have any Y-DNA from Maykop’s early period (a single possible J, but marked as contaminated), but the 3 Late Maykop samples with Y-DNA belong to L, like the Armenia_ChL ones.

Archaeologically, I’ll just add a few quotes from Ivanova 2013² to complement the previous reference. Speaking about the appearance in the North Caucasus of luxury items (gold, silver, carnelian, turquoise, lapis lazuli), she mentions the possible route:

The distribution of highly prized luxury goods, especially ornamental stones, hints at the westward extension of this central Asian network of the Namazga II-III period into north and west Iran.

And making a case for the associated distribution of early tumuli:

The plain of Lake Urmia may indeed have been the frontier region where the societies of Iran and the Caucasus came into contact. Near the southeast corner of Lake Urmia, excavations took place in a cemetery of eleven tumuli at the site of Sé Girdan (Muscarella 2003, 126 f.). The mounds were encircled with revetments of rubble stone and contained one grave each, often covered by a rock pile. The well-built stone chamber tombs with pebble floors and timber roofs contained ochre-coloured skeletons lying on their right side with legs drawn up and hands in front of the face. Grave goods included numerous tiny beads of faience, gold, and carnelian; a stone scepter with a feline-head shaped end; a silver cup; flat axes and pick axes of arsenical copper (Muscarella 1969, 1971) (Fig. 4.22). Muscarella (2003, 125) concurred that the tumuli represent “a north-western Iranian manifestation of the North Caucasian, Maikop, Early Bronze Age culture”. However, animal-headed stone scepters and long axes of the type represented at Se Girdan are unknown from the north Caucasus, while pickaxes are extremely rare among the Maikop period finds.

Series of burial mounds in the southeast Caucasus provide better parallels for the tumuli in the plain of Lake Urmia.

And here she describes de Tumulus 1 at Telmankend, the tumuli from Soyuq Bulaq and a partly damaged tumulus near Kavtiskhevi in central Georgia.

The similarities of these tumuli with the burial monuments of the north Caucasus are unmistakable: earth mounds with encircling rubble stone revetments, stone heaps over the tomb, tomb chambers (among them also very large square chambers with stone-laid walls and pebble floors), red pigment, and the postures of the body are common features in both regions.

The geographic distribution of these characteristic tumuli seems to mark a route from northwest Iran along the valley of the Kura to the passes of the central Caucasus. Researchers regard sites like Sé Girdan as unusual monuments, which emerged under influence of or even through the direct migration of north Caucasian communities (Muscarella 2003, 125; Korenevskij 2004, 76, note 2; Kohl 2007, 85). This view appears feasible if such sites are viewed in isolation. Considered in the historical context outlined previously, however, the available evidence begins to reveal a new and meaningful pattern. Like several other innovations presented previously, the complex of peculiar funerary practices most probably spread from northwest Iran and the lowland areas of the southwest Caspian northwards along the valley of Kura, and reached the northern slopes of the Caucasus around the second quarter-middle of the fourth millennium BC. Thus, the funerary evidence adds further credibility to the hypothesis that the foreign elements in the north Caucasus originated from the Iranian plateau and its borderlands, and not from Greater Mesopotamia or the Anatolian highland, two regions which lie far outside the area of distribution of early tumuli.

Indeed David Anthony³ mentions the Sé Girdan tumuli and their remarkable similarity to the Novosvobodnaya-Klady types, and concludes:

The Sé Girdan kurgans could represent the migration southward of a Klady-type chief, perhaps to eliminate troublesome local middlemen.

However, it seems that Ivanova’s suggestion is better backed up by recent archaeology and (pending further details) the genetic evidence.

Regarding the relationship between Maikop and Novosvovodnaya, there is a relatively small but significant genetic difference between the two. The latter seems to represent a second wave of migration, this one more specifically linked to NW Iran, rather than East Iran/SC Asia. For example, in Supp. Table 9, when modelled as 3-way mixture of CHG, Anatolia_ChL and EHG:

Yes, that’s a negative value for EHG in Novosvobodnaya. Conversely, in Supp. Table 10:

This time Maykop having a negative value for Iran_ChL while Novosvobodnaya takes a good amount of it.

The genetic pattern is more or less mirrored by the contemporary cultures south of the Caucasus, where there is a shift between Armenia_ChL and Armenia_EBA (Kura-Araxes) towards Iran_ChL. In fact the new Kura-Araxes samples from this paper also behave like Novosvobodnaya in these models.

The other difference is in the Y-Chromosome, with Novosvobodnaya having two J2a1 samples and one G2a2a.

Archaeologically, I think the main difference is in the increase in metal weapons found in Novosvobodnaya burials, but the details are not to clear to me, so I’ll leave it there for now.

25 thoughts on “So what was going on around the Caucasus?”

The Genomic Formation of South and Central Asia – Some thoughts, Part 1 »