As a brief fill-in, I will look at what the recent data adds to our understanding of the 4000 – 3000 BC period in northwestern Eurasia, which corresponds to the critical ‘’transition’’ period between the collapse of ‘’Old Europe’’ and arrival of steppe migrants. In reality, events are of course more complex, if one understands the totality of the data, and what is even more exciting is understanding how events in northwestern Asia tie in with those in Europe. In place of a long didactic post, I will address some key questions:

1)  Are Uruk colonists behind the Majkop phenomenon?

This is a negative, even by chronological criteria alone. The push by Uruk colonists from south Mesopotamia toward its northern frontier occurred during the middle Uruk phase, c. 3700 BC. By this time, Majkop already existed, some 1000 km to the north.

Rather, the origin of the Majkop phenomenon probably emerges from the Late Chalcolithic koine in East Anatolia & southern Caucasus – the ‘’Chaff-Face Ware horizon’’, which would also subsume regional variants and special cases, such as the Leila Tepe culture in Azerbaijan (which also featured kurgans). The lack of Levant-type admixture is further evidence against an Uruk origin for Majkop.

Whilst Wang et al. bundle Meshoko with Majkop, they are actually rather distinctive (the former feature austere funerary gifts, and are associated with fortified settlements; whilst they were disused during Majkop period, and funerary wealth reached a peak). As per Trifinov, the appearance of Meshoko group seem to me as rustic mountain farmers from Darkveti culture moving north over the mountains; and therefore Majkop might represent a second, later movement (although the genetic data can also be explained by a constant trickling of people, instead of clearly defined migration horizon).

This archaeological unit is characterised by tumuli burials, a pastoralist economy and presence of Majkop-styled ceramics as burial gifts. This group spread out along the Piedmont steppe, apparently displacing (& absorbing some of) the preceding ‘’Eneolithic Steppe’’ populace.

I would hypothesize that these are new migrants to the Fore-Caucasus, being part of an intricate network of exchange ushered in by the appearance of Majkop- a ‘’pull effect’’. The exotica of Central Asian origins (e.g. lapis lazuli) might have been brought by these groups, and they might also have introduced certain forms of pastoralism into the western steppe.

As can be visualized, Steppe Majkop lie on a cline between so-called ‘West Siberian Neolithic” & Majkop-proper. 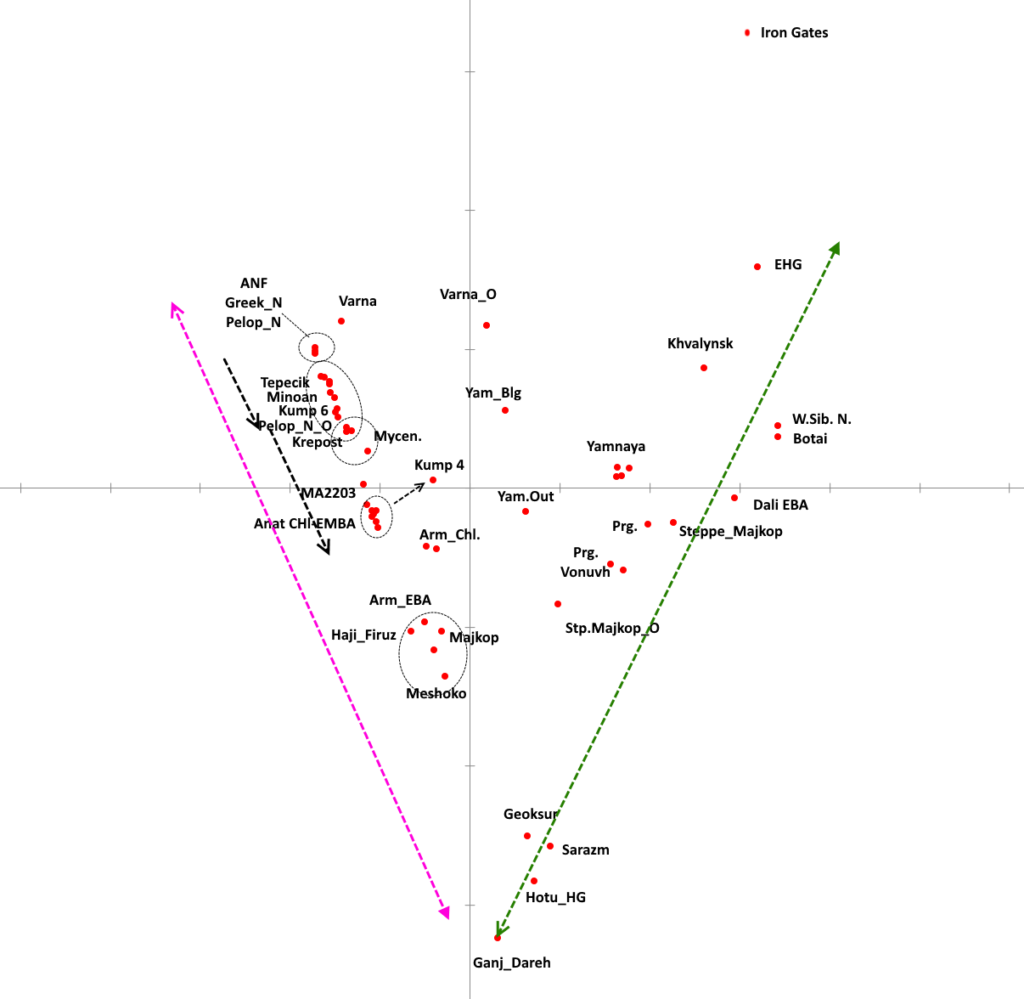 This is a huge topic in itself, so these are some brief comments. We observe the close relationship between West Anatolian, Greek and early European farmers. However, these must represent a local subset/ founder effect, because we know that even within Anatolia there are individuals which lie somewhat further toward the Iran/CHG pole (Tepecik, from central Anatolia, Krepost- Neolithic Bulgaria; and according to some friendly ‘word -of -mouth’, Early Italian Farmers).

As the Neolithic progressed, individuals from Greece and Western Anatolia shift somewhat eastward, perhaps as part of ongoing admixture & contacts across an north Mediterranean Neolithic koine.

More striking, however, are the series of population shifts within Anatolia between 5000 and 3000 BC.  As we know, the south central Anatolian plain (Cappadocia, etc) served as a vital demographic & cultural hub for the Neolithic progression further west (even if pockets of pre-Neolithic communities in west Anatolia were genetically similar). It is therefore quite remarkable that this regions sinks into obscurity after 5000 BC. Although some of this is research related, there must be other reasons, such as land and population exhaustion. Indeed, it is perhaps no coincidence that from c. 5000 BC, north central Anatolia and the Sinope peninsula now become dotted with settlements, having been something of a terra incognita during the Neolithic. It therefore seems that the link between the East and the West Pontic region ran predominantly via northern Anatolia, perhaps via a interconnecting web of seaborne contacts. As noted previously, the sample ‘’Anatolia Chalcolithic’’ (Barcin Hoyuk, c. 3800 cal BC) represents a significant shift compared to pre-4000 West Anatolian Neolithics.

That it can be modelled as descending from, or sharing ancestry with the Majkop phenomenon dovetails with the appearance of novel cultural groups in western Anatolia (still to be fully understood), bringing with them new technologies, e.g. arseniccal bronzes. At the same time, ideas and individuals might also moved from Europe back to Anatolia, since at least 4500 BC, during the Varna-Karanovo VI period, and this continued as late as 3300 BC (Cernavoda, Usatavo).  Naturally, this paragraph does not do justice to such a topic, and indeed much more genetic data and clarification of some lingering chronological issues are needed to fully tackle this issue.

4) The genesis of the Kurgan phenomenon

Marija Gimbutas had astutely observed a series of phenomena manifesting as ‘’waves’’ through Europe, and the ”general gist” of her views have held up. However,  we can now refine these with our more developed theoretical backgrounds, a clearer understanding of chronology, new finds, and of course, aDNA. We now understand that various ‘’Kurganized’’ groups like Majkop, Remedello, Baden-Boleraz and GAC do not show any steppe ancestry. Even in the heart of the Hungarian steppe, we see Late Chalcolithic, in-kurganed individuals without steppe ancestry, belonging to Y-hg G2a. These phenomena therefore represent a series of societal changes which occurred as part of an interaction and competition between disparate but inter-connected post-Neolithic groups spanning from central Europe to central Asia; associated with the Secondary Products evolution, wheel-traction complex, metallurgy, etc.

Whilst we lack Cernavoda & Usatavo samples, we do have some Early Bronze Age samples from Bulgaria – c. 3200-2500 BC, which date to after the collapse.

Of course, later in the MLBA, steppe ancestry rises significantly in the northern Balkans (e.g. the Croatian MLBA sample set), but that is for a future analysis.

4a) The Formation of Yamnaya.

Leaving aside the still debated question about the ultimate source of the ”CHG” admixture in Eneolithic Steppe, an expansion from the Don-Kuban steppe seems to have been the main driver, rather than Khvalynsk. Whatver the case, we can see that Yamnaya is a more ”farmer shifted” fusion of Progress & Khvalynsk (crudely speaking); and the source of the ANF shift must be, both, Majkop and Cucuteni groups. 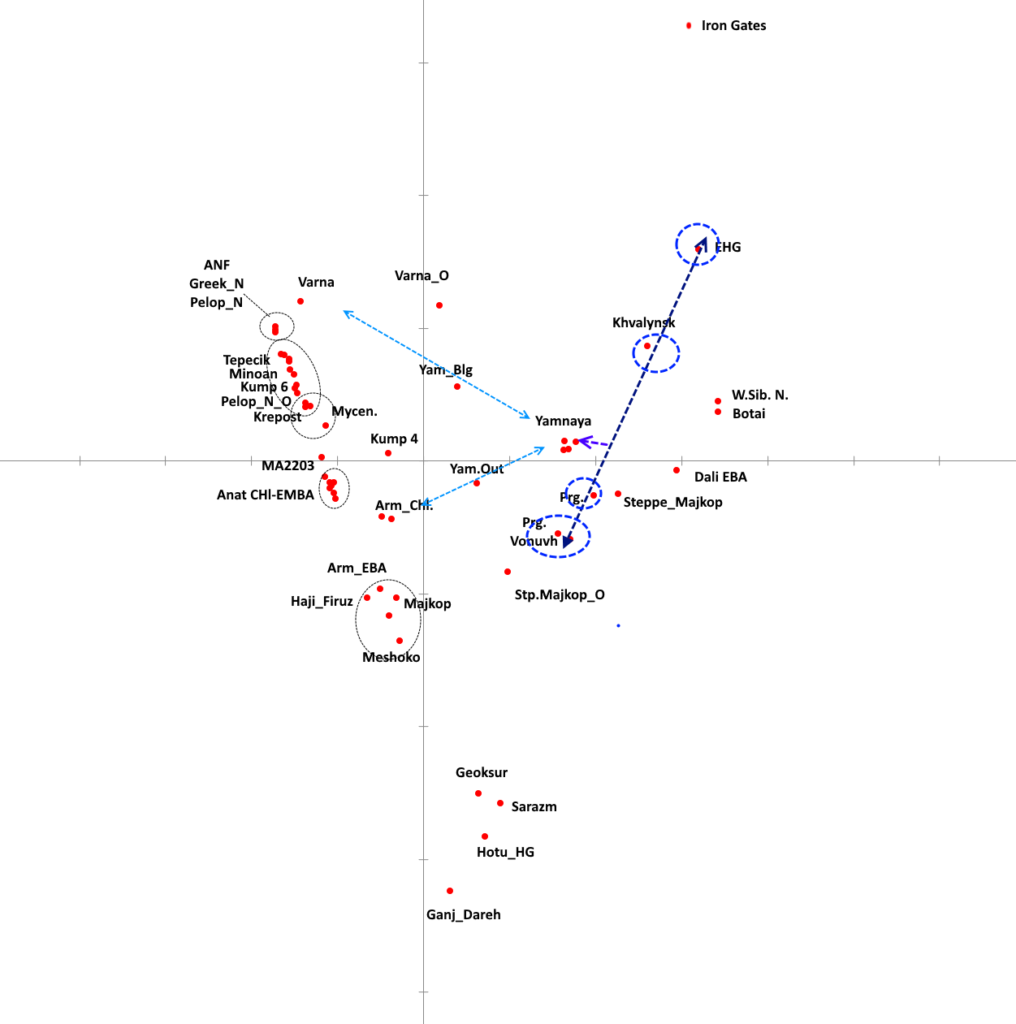 It is curious that ”outlier” individuals can be found both north and south of the Black Sea, suggesting bilateral admixture & mobility.