A new paper has been published recently with some new samples from Estonia:

As can be seen already from the title, the paper references the Uralic language as an important part of it. From the highlights:

However, since I don’t want to go into linguistic implications in this post (I think it’s too early for that), and given that my knowledge of the archaeology of the area is very basic, I will just comment on the genetic findings here.

The paper brings new samples from the Bronze and Iron Ages (the latter from Ingria too, in addition to Estonia), plus some middle ages samples as a bonus. And it puts emphasis on the Siberian ancestry and the ChromY haplogroup N (N3a3a, I believe formerly known as N1c), which has been connected to Uralic expansions in the pre-aDNA era. For a graphical abstract, they provide the following image:

And here’s a graph of the autosomal analysis: 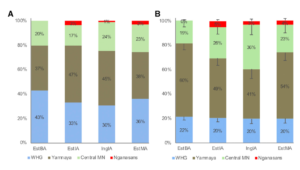 And here what I reproduced using the Global 25 (scaled) datasheets (G25) provided by Eurogenes with a few more target populations:

In short, the genetic history of Estonia can be summarised as follows:

And this is basically it from a genetic point of view. But those interested in more detailed analysis and modelling (plus options for speculating in the comments section) can head on to the next part.

Genetic modelling and other stories

Since the more generic genetic history of the region is rather simple and the paper emphasises the importance of Siberian admixture and the appearance of significant frequencies of Y haplogroup N (leaving aside linguistic debates), I’ll try to explore the models that are somehow suggested fr the said phenomenons.

The idea from pre-aDNA times, and that this paper seems to follow is that there was an expansion of a population of Siberian origin bearing Y haplogroup N. This would be something similar to the expansion of a steppe population and their male lineages R1.

As expected, Finnish and Ingrian are the two top populations, with the first ancient one being Corded_Ware_POL, with small difference. Using AncestorsMix (link on the right column, or bottom on mobile) with parameter 1 for one generation, this is what I get:

Again as expected, the model with CW_POL works almost as good as the ahistorical Finnish modern population. But of course the former lacks Siberian admixture, so switching to Xmix (link in the same place as mentioned above) and adding some plausible population to provide such admixture:

Now, nothing of this looks very impressive or suggestive, so I went a step further and created another ghost population, this one the putative even more eastern (this would be close to the Ural mountains) ancestor of the Proto-Finnic ghost population, which would have had a 50% genetic impact in that Proto-Finnic one. This would be something like Yamnaya for Iberia BA, i.e, a population that first admixed in a 50/50 ratio with Central European ones, who in turn mixed in a 50/50 ratio with Iberian ones. That makes Iberia_BA at around 25% Yamanaya, even if the population replacement was quite higher than that. To see this putative Pre-proto-Finnic ghost population in a model:

And again, to check the closest populations to this Pre-proto-finnic ghost:

Rather surprisingly, we now get NW European populations at the top. Back to AncestorsMix with 2 generations:

Not too bad, but again it obviously lacks Siberian ancestry, so adding plausible sources:

And now we’d have a model for a putative Pre-proto-Finnic (or even Proto-Uralic) populations that could be modelled as ~88% Scotland_CA_EBA + ~12% RUS_Bolshoy_Oleni_Ostrov, and who would have been close to 100% Y chromosome N and lived near the Urals, c. 2000 BC (?).

Some of you may think that nothing of this makes a lot of sense, and I can’t say I’d disagree with you. But I still wanted to do this apparently futile exercise to try to understand the logic in the suggestion (which the paper has followed) of an expansion of a population with an origin in Siberia whose legacy in modern Estonians can be seen in the traces of Siberian admixture (which arrived in the Iron Age) and their high frequency of ChromY N (which also arrived in the Iron Age). And I have failed, I admit. But that doesn’t mean the idea is necessarily wrong, and I can only wish the authors good luck in their quest for finding such population should they embark on it.

In the meantime, I’m going to suggest a different scenario that makes more sense to me personally: As far as I can see, the only evidence we have of a Siberian expansion of ChromY N lineages is through the Arctic, linked to hunter-gatherers (mostly fishermen) who later were slowly adopting some technological advances (metals, maybe some domesticates…) from their contacts with their more advanced food-producing southern neighbours. The model I would follow for the admixture and introgression of male lineages from these northern hunter-fishermen into these more advanced southern populations would not be the Steppe -> Europe R1a and R1b expansion, but rather the earlier model we found during the Neolithic, where farmers were slowly getting admixture from the hunter-gatherers and also their male lineages, which in the case of Neolithic Europe reached very high frequencies by the late Neolithic (80% plus?) even though the impact on the autosomes was much more moderate (c. 25%). And the expansion as such of those lineages (I2a mostly) and that ancestry (WHG) happened during the Paleolithic. We later see a few expansions of those lineages associated to much later populations with no direct connection to WHG, like the Dinaric I2a or the Germanic I1. The story of haplogroup N might have been similar in some ways.

Finally, regarding the non-N male lineages, we have to specify that they belong to R1a-Z282, which was found in the CWC. We don’t know yet how far east they expanded, since there is a gap in the sampling of the forest steppe from the Baltic to east of the Urals (where we already find the sister clade R1a-Z93). The question here is if Fatyanovo-Balanovo, and the later Abashevo cultures had one or the other branch of the R1a-M417 lineage. Something that I hope won’t take too long before we know.

Cultures like Volosovo (basically forest steppe hunter-gatheres), given the time and place will be mostly of EHG or West_Siberian_N genetic origin, with some dead R1 lineages or maybe some still living Q lineages in that region. I don’t think they can be plausibly considered the origin of any expansion, and less so the (hypothetical) one that reached Estonia in the Iron Age.

The final note about why I left any linguistic speculation out of this I hope is now clear: because Uralic languages are attested late, and we don’t have enough data to say much about the origin and spread. Genetics, as seen above, can’t tell us much. Uralic could have arrived to their modern speakers in many ways that genetics can’t show with this level of resolution. If we were to infer from genetics where did the language of Estonians come from with the current data, we’d find ourselves with only one reasonable option, unrelated both to Siberian ancestry and to ChromY N. A second, less reasonable one, would imply Baltic hunter-gatherers. So for now I’m personally going to wait patiently for this question to be solved -with some luck- in the next few years.

I was looking at the Bolshoy Oleni Ostrov (BOO) samples, which apparently already belong to ChromY Hg N3a3’6. If that’s the case, I don’t see the need for any complicated scenario or putative invasion/replacement in the Estonian IA population coming from the east, since as per one of the models above, nothing else is needed to model them:

These BOO samples are from the Bronze Age:

Contemporary samples from Estonia don’t have any BOO-related admixture, but BOO samples do have some 10% admixture from more southern farming populations.

We’ll have to wait for more aDNA from the forest steppe, but nothing seems to indicate so far that a population from around Moscow during the first half of the 1st mill. BC will have higher levels of Siberian admixture or Hg N3a3’6. If anything, I’d rather expect them to have less, but we’ll see.

The later Levänluhta samples (300-900 AD) from West Finland are largely a mixture of the Estonia_IA population and the BOO one:

So as far as the data shows, it’s mostly an ongoing admixture between the Corded Ware descended farmers from the south and the Siberian populations from the north, both in the autosomes and in the male lineages.

Of horses, camels and extinct lineages »