Just a few days ago the preprint of a new study on the prehistory of the North Caucasus was released (Wang et al. 2018). This is a major paper for understanding the West Eurasian prehistory, bringing (possibly) a few long awaited answers, but also several new interesting questions.

Archaeogenetic studies have described the formation of Eurasian ‘steppe ancestry’ as a mixture of Eastern and Caucasus hunter-gatherers. However, it remains unclear when and where this ancestry arose and whether it was related to a horizon of cultural innovations in the 4th millennium BCE that subsequently facilitated the advance of pastoral societies likely linked to the dispersal of Indo-European languages.

Indeed, the exact origin and genesis of the so called ‘steppe ancestry’ (AKA Yamnaya ancestry) has been quite a mystery. We knew that this type of ancestry could be described as a mixture of Eastern Hunter Gatherers (EHG) from the Forest Steppe and Steppe river banks of Eastern Europe and Caucasus Hunter Gatherers (CHG) from the South Caucasus. But somehow this was always problematic, due to the geographical separation of these groups, the specific mtDNA and Y-Chromosome profile of the putative resulting group (suggesting a strong sex biased admixture) and the fact that to a degree, while the model worked, it was never really as good as you would expect if you had the right populations.

We observe a genetic separation between the groups of the Caucasus and those of the adjacent steppe. The Caucasus groups are genetically similar to contemporaneous populations south of it, suggesting that – unlike today – the Caucasus acted as a bridge rather than an insurmountable barrier to human movement.

Indeed, it seems that for the Neolithic Farmers, the Great Caucasus wasn’t such a big barrier (though it seems to have slowed down the penetration of the Neolithic for quite a while), but the steppe itself does seem to have acted as a clear barrier for them, as can be seen by the dotted line in the map from the preprint: 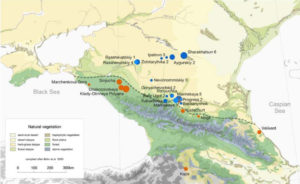 As can be seen, the line dividing these two populations (orange and blue dots respectively) is in the border between the northern slopes of the Great Caucasus and the steppe in the North Caucasus area. This means that while farmers moved across the mountain range, they never moved beyond it, probably because the steppe was just not suitable for their subsistence economy (based not just on animal husbandry, but also on crops).

The paper focuses to a large degree on the differences between the two populations, and does not go much beyond that in terms of the consequences from these findings. So here I’ll focus a bit more on 3 samples labelled as “Eneolithic steppe” that seem to be key for understanding the genesis of the steppe Early Bronze Age populations and by extension the Bronze Age of most of West Eurasia:

It’s somehow unfortunate that even if both males seem to have good coverage, their Y haplogroups could be determined in greater depth to see if they belong to R1b-M269. Maybe someone will try to test them further once the samples are publicly available. Their mtDNA also seems to be typical of steppe populations. Leaving aside the very generic H2, for the other two ones several matches can be found in CWC, Unetice, Poltavka and Andronovo (but none in ancient West Asia thus far).

Autosomally this population is very close to Yamnaya. For example, in Sup. table 13, Yamnaya_Samara is modelled as 88.9% Eneolithic_steppe, 5.2% Anatolia_N and 5.9% WHG (though I suspect that with something like Ukraine_N instead of WHG it might be a better fit). This would make this Eneolithic_Steppe population at roughly a 50/50 mix of EHG and CHG. The question now is if this is what actually happened in the area during the Eneolithic. And for me, the answer looks like a clear no.

First, we do have contemporary samples from the Eneolithic North Caucasus foothills (I2055, I2056, I1722, c. 4500 calBCE), and just a quick look at the PCA on the main paper (Fig. 2D) tells us that they are way too western to be a suitable source. That kind of mix would never work for those Eneolithic_steppe samples. And then we have the f3 admixture tests checking for CHG-EHG admixture and the signal in the Eneolithic_steppe samples is weaker than in the much later Yamnaya groups (Sup. Fig. 3): 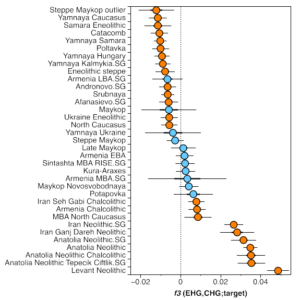 This probably means that the population is old in the area, probably Mesolithic, and Yamnaya got some extra EHG-related admixture that increases the signal. It also has to be kept in mind that before the invention of wheeled vehicles (and probably the domestication of the horse), no one was really living in the open steppe, where survival would have been very difficult. Mobility was limited to the river routes, and the Forest steppe was very distant from the Caucasus mountains to have any close contacts.

So what does this all mean? Well, I think a few interesting points that I’ll just briefly outline to not extend this post too much:

There are many, many more things to debate in this very interesting paper (Maykop itself, the arrival of Iranian Farmers at around 3500 BCE in the Novosvobodnaya phase/culture, the arrival of Botai-related ancestry to the North Caucasus steppe c. 3200 BCE, etc… but I’ll leave that for either the comments section of for a later post.

P.S: I did want to make a small comment about one conclusion in the paper regarding the modern difference between populations from the North Caucasus and the South Caucasus:

First, sometime after the Bronze Age present-day North Caucasian populations must have received additional gene-flow from populations north of the mountain range that separates them from southern Caucasians, who largely retained the Bronze Age ancestry profile.

I don’t know, but it seems to me that the very “Yamnaya-like” profile seen in modern North Caucasian populations derives in great part from their putative Mesolithic ancestors who were “right there”, not in some distant northern location. So the distinction between north and south seems easy to explain by that ancient difference without the need to refer to historical events (which obviously happened, but don’t necessarily explain the genetic difference. More about this in a future post).

39 thoughts on “The genetic prehistory of the Greater Caucasus – Preprint. A few answers and many questions.”

So what was going on around the Caucasus? »