The domestication of the horse has been an event with important implications in human history, and as such it has drown the attention of archaeologist and historians for a long time, and more recently of ancient DNA studies. I’ll briefly recapitulate some of the latest findings mostly related to ancient DNA.

We know for a long time (in DNA era terms) that modern horses have a low diversity, specifically in their Y chromosome. This was supposed to mean that they all probably descended from a small group that was first domesticated, and that later only some wild mares from other places where incorporated into the domestic gene pool. However, last year’s Ancient genomic changes associated with domestication of the horse (Librado et al. 2017) revealed that ancient horses (mostly Scythian ones from the Iron Age) had a greater diversity than modern ones and that the modern low diversity is due to some bottleneck that happened somewhere between the Iron Age and the Middle Ages.

Earlier this year, another report was published (Ancient genomes revisit the ancestry of domestic and Przewalski’s horses, Gaunitz et al 2018) where it was revealed that Botai horses were the ancestors of modern Przewalski horses, but not to modern domestic ones. 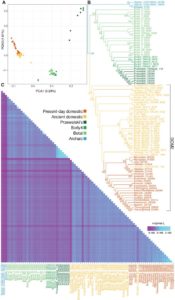 Finally, the Decline of genetic diversity in ancient domestic stallions in Europe (Wutke et al. 2018) analysed the Y chromosome of ancient horses finding 4 different haplotypes. The haplotype that is fixed in modern domestic horses (HT-1) was found to be very rare in early domestic horses, and first started to become prevalent in Asia during the Iron Age and later in Europe (either during the Roman period or the early Middle Age). Przewalski horses belong to HT-2, that seems to have been the most common lineage before domestication (probably being the main lineage in the steppe), while another 2 haplotypes (HT-3 and HT4) we found to be common in early domestic horses, but later disappeared.

So, as usual, we still don’t have a clear answer about where was the horse first domesticated. Generally speaking, I always considered that the western part of the steppe was the best candidate for the horse domestication, with Anatolia being a distant second option (other candidates being more marginal). I still think that the western steppe is the best bet, but somehow the fact that the Botai horses are not a genetic clade with early domestic ones seems a bit of a problem for it. For an animal as mobile as the horse, the steppe seems to be an easy corridor for continuous gene flow. I don’t know how parsimonious it is to think that horses of the western part of the steppe had diverged many thousands of years ago from the ones of the central part. Could be.

There was an old paper (Mashkour, M. 2003. In French) which looked at the osteological morphology of Botai, Przewaski, Dereivka and other ancient horses (wild and domestic) and found that neither the Botai horses or those from Ukraine or the Urals had the domestic morphology, which was better represented by other wild specimens from southern regions (Paleolithic horses from Portugal, Italy and Southern France, in addition to holocene ones from Iraq). While this is no substitute for ancient DNA, at least she was right so far about the Botai horses not being the origin of domestic ones. So let’s see what ancient DNA says about it in the next year or so.

[UPDATE: I just realised that a new paper appeared 2 weeks ago and I didn’t notice it.

Late Quaternary horses in Eurasia in the face of climate and vegetation change, Leonardi et al 2018

Iberia and the central Asian steppes harbored suitable environments for early horse domestication
We next investigated predictions of suitable climatic conditions around the time when horses were first domesticated. Between the proposed domestication centers (central Asia, eastern Anatolia, and Iberian Peninsula), the latter region remains very suitable for horses throughout the entire Holocene, while the Pontic-Caspian steppes show high values of p-Hor only up to 7 ka B.P. based on the European niche. The whole area surrounding Botai appears extremely suitable for Asian horses 5 ka B.P., in agreement with the archeological record supporting their domestication during the Eneolithic, but not for the European animals.

For some reason they consider both Iberia and Central Asia as the most likely places of domestication, without further commenting on eastern Anatolia. To me, if it wasn’t the Pontic-Caspian steppe, it seems that Anatolia would be the best bet. Might have to write a separate post about it if time allows.]

There is some debate about the correct terminology (wagons, carts, chariots,…) depending on the number of wheels, design, size, usage… so I will care more about the description than about the term used.

The earliest wagons date to mid 4th millennium BCE, and as mentioned above we don’t know their exact place of origin. Could be from somewhere around Central to SE Europe, to somewhere around Mesopotamia. They had 4 solid wheels and were pulled by oxen. While the appearance of wheeled transport is almost simultaneous in a large area from SC Asia to Europe, it appears a bit later in the steppe, coinciding with the early Yamnaya culture ca. 3100-3000 BCE. The Maikop culture is usually credited as the earliest one with burials containing a wagon. 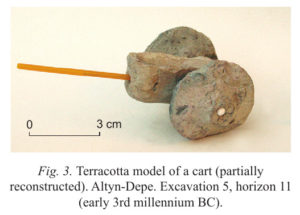 Meanwhile, in the Near East there was (long?) tradition of using equids either for work or for ritualistic purposes (EQUID BURIALS IN ARCHAEOLOGICAL CONTEXTS IN THE AMORITE, HURRIAN AND HYKSOS CULTURAL INTERCOURSE, Silver 2014):

A tumulus grave SMQ 49 containing human remains, grave goods and an equid (Phase 3) has been recently found from As-Sabiya in Kuwait on the Arabian Peninsula. According to the author, the burial customs and associated grave offerings allow the dating of the tomb to the Late Neolithic–Al-Ubaid period, which would mean the date as early as the 6th–5th millennium BC. The neighbouring site has a strong Ubaid presence, and imports from Mesopotamia are abundant. If the dating is correct, as it seems with particular stone weapons and bone tools, this equid burial would be the oldest ritual burial of an equid known so far from the Near East. The equid was tentatively identified as an onager belonging to undomesticated equidae. (Makowski 2013). This earliest equid burial seems to be connected with Mesopotamia through the Al-Ubaid culture, the predecessor of the Sumerian Uruk culture.

In the Mesopotamian finds chariot burials including equids have been found in Kish, Ur and Abu Salabikh from Early Bronze Age contexts. In Kish, Chariot Burial II contained four-wheeled chariots and four equids buried on top of them. The connection of the equids with the chariots has been disputed in the case. It is apparent that there was another chariot burial with three two-wheeled chariots that contained equids as well as Chariot Burial III. In Chariot Burial II, a mixed combination of equids, including horses (equus caballus) and asses (equus asinus and equus hemionus) were identified. Interestingly, the tombs are vaulted brick tombs which date from the Sumerian Early Dynastic period of the Early Bronze Age (Zarins 1986: 169–171). Abu Salabikh, an ancient Sumerian and Semitic site, also provides equid burials associated with humans dating to the Early Dynastic period. More evidence of equid burials including asses that are associated with humans have come from the Hamrin Basin in Mesopotamia (Zarins 1986: 171–175). The chariots discovered from the Sumerian Royal graves of Ur (dated to the Early Dynastic period) were either drawn by oxen or asses (Woolley 1946: 20). Clearer evidence of equids in Sumerian Ur come from the Ur III period graves, like from the grave of Šulgi and Amarsin dating from ca. 2100 BC. Animals were also sacrificed at the entrance to a tomb PG 1054 in Ur. (Woolley 1931: 343–345 and Woolley 1941: 40-41 apud Zarins 1986).

Also interesting in this respect is Burial customs at Tell Arbid (Syria) in the Middle Bronze Age. Cultural interrelationswith the Nile Delta and the Levant (Wygnańska 2008).

Wagons/carts (or whatever name one prefers), were driven into war using equids (onagers or asses) as draft animals, though these were still using 4 solid wheels and where probably not directly used in the battlefield:

An important set of innovations then came from the steppe, specifically from the Sintashta culture. Quoting D. Anthony (The horse, the wheel and language):

Eight radiocarbon dates have been obtained from five Sintashta-culture graves containing the impressions of spoked wheels, including three at Sintashta (SM cemetery, gr. 5, 19, 28), one at Krivoe Ozero (k. 9, gr. 1), and one at Kammeny Ambar 5 (k. 2, gr. 8). Three of these (3760 ± 120 BP, 3740 ± 50 BP, and 3700 ± 60 BP), with probability distributions that fall predominantly before 2000 BCE, suggest that the earliest chariots probably appeared in the steppes before 2000 BCE (table 15.1). Disk-shaped cheekpieces, usually interpreted as specialized chariot gear, also occur in steppe graves of the Sintashta and Potapovka types dated by radiocarbon before 2000 BCE. In contrast, in the Near East the oldest images of true chariots—vehicles with two spoked wheels, pulled by horses rather than asses or onagers, controlled with bits rather than lip- or nose-rings, and guided by a standing warrior, not a seated driver—first appeared about 1800 BCE, on Old Syrian seals. The oldest images in Near Eastern art of vehicles with two spoked wheels appeared on seals from Karum Kanesh II, dated about 1900 BCE, but the equids were of an uncertain type (possibly native asses or onagers) and they were controlled by nose-rings (see figure 15.15). Excavations at Tell Brak in northern Syria recovered 102 cart models and 191 equid figurines from the parts of this ancient walled caravan city dated to the late Akkadian and Ur III periods, 2350–2000 BCE by the standard or “middle” chronology. None of the equid figurines was clearly a horse. Two-wheeled carts were common among the vehicle models, but they had built-in seats and solid wheels. No chariot models were found. Chariots were unknown here as they were elsewhere in the Near East before about 1800 BCE.

So the Sintashta people seem to have been the inventors of spoked wheels, which made the carts much lighter and together with using a real horse to pull it, much faster and useful in battle. These innovations didn’t take long to spread either, as we already have a depiction of spoked wheels in the Near East around 1900 BCE and another with the full package (spoked wheel, horse, bit) around 1800 BCE. However, Mesopotamian artisans had more resources and managed to make some improvements over the steppe originals (again, from Anthony):

When horse-drawn chariots appeared in the Near East they quickly came to dominate inter-urban battles as swift platforms for archers, perhaps a Near Eastern innovation. Their wheels also were made differently, with just four or six spokes, apparently another improvement on the steppe design.

Like the rich burial tradition (and many other cultural and technological innovations), they must have arrived from the Near East. We’re still waiting for more Mycenaean ancient DNA, especially from early elite burials. The shaft graves (brief description of the contents , some pictures of their goods) might be able to provide some good insights, so let’s hope it’s not too long before we get to see those results.

53 thoughts on “Horses and wheeled vehicles”

A first, and intriguing glimpse at TRB West Group aDNA »